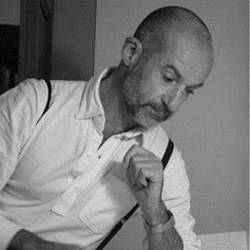 An architect and designer with a passion for art and theatre. With the help of his friend and mentor, Mario Mariotti, he exhibited his artistic works in a series of collective and personal exhibitions organized by Mariotti in 1994. He obtained his degree in Architecture from the University of Florence in 1989. His graduation project entailed the stage production and set design for a contemporary dance event in the Cascine amphitheatre in Florence. The project then went on to become the noted “Florence dance festival”. He then began to work as a freelance professional, operating in different fields and paying particular attention to the location and specific nature of everyday objects. His projects are filled with emotions, images and memories of his travels. He collaborates with numerous design companies and stores, including the noted “International Design” store of Florence. He has been awarded numerous prizes and received much acclaim, both nationally and internationally, in the fields of design and architecture. In 1998, together with Massimo Dei, he founded Studio63. A firm believer in bringing back quality to good design, he is often invited to participate in debates on the subject. Furthermore, he teaches classes on retail design in various universities and schools, both at home and abroad.